“The money Joe sent would have provided the deposit on a house in a northern industrial town, or in more personal terms an engagement ring.”

It is a touching story. It touched Joe Douglas for near on £19,300. By the end of the show, at the end of their story, Joe calculates exactly what it cost him over ten years to educate a young Ugandan, Ronnie.

It is a true morality tale that begins in 2002 with Joe, an 18 year old out of Stockport, enjoying a six week gap-year trip to Uganda, whose sights and sounds hit him ‘like a pop-up book’. It is not long after returning home that Ronnie ask Joe for help.

We never meet Ronnie but read and hear his emails and txts. They are pretty short, spell out how much money he needs to keep his education going and – later – how much to compensate the family of a fatal road traffic accident; how much to pay the hospital for his dying mother. The emails present on a video screen of a blackboard and then, diminished, pile up into an on-going reminder of Ronnie’s situation. There are beer mugs up there too, a nice calculation in student terms of how many pints can be bought for the £20 regularly sent to Ronnie by Western Union money transfer.

Joe introduces his story with the lights up. He is not a trained actor (the programme notes make clear his credentials as a director) and he would apologise for that. No need really; his one-man performance starts as he talks fondly to the seat reserved for his aunt Maria in the front row, for it is his auntie who looked after him in Uganda, and who interestingly did not take to Ronnie.

The money Joe sent would have provided the deposit on a house in a northern industrial town, or in more personal terms an engagement ring. He does actually take a ring out of his pocket and smiles, remarking that his parents paid for the wedding. And Ronnie? The BBC World Service went looking for him when this story was first staged at the Fringe in 2012. He has a FaceBook page apparently and does not want a copy of the script.

This work, a co-production by Macrobert and Utter, is smooth. Its careful technicals are well-rehearsed, the soundtrack is appropriate without sentimentality, Joe Douglas’s performance is characterful and honest. His story asks you to risk a leap of faith. I’m glad I did. 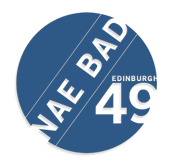