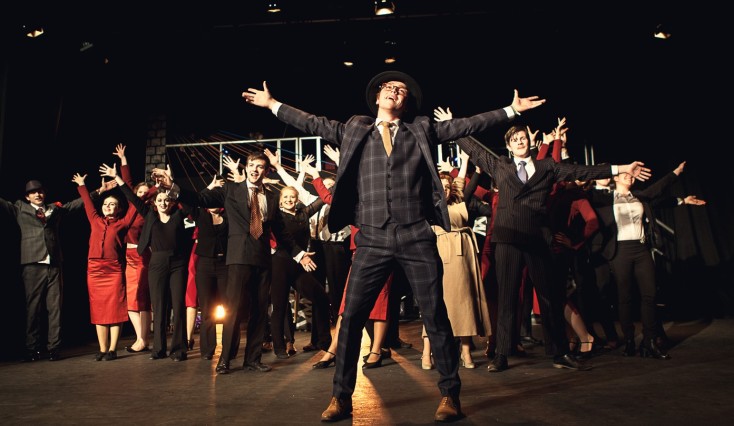 “A feel-good romp of a show”

Guys & Dolls has a special place in my heart, as it was my first footlights show at university some ten years ago. I remember the hours I spent rehearsing the gruelling dance sequences and complex harmonies, so I was amazed at how well this cast of Edinburgh University students delivered on both counts. The scene in Havana was perhaps a bit ambitious choreographically and could have contained more progression and showpiece moments, but overall the chorus numbers were performed with great vim and pizazz.

The stars of show also delivered with aplomb. Ellie Millar as Sgt Sarah Brown had a voice that danced with the purity and clarity worthy of a leading lady, and her rendition of If I Were a Bell struck a fine balance between comedy and stunning vocal range. Oliver Barker oozed with masculinity and presence as Sky Masterson, while Tom Whiston brought a likeable naivety to Nathan Detroit. Mae Hearons was a delight as Miss Adelaide, and really came into her own in act two with a string of dazzling songs.

While the vocals across the board during the first half of the production were a little shaky (I’ll put it down to nerves in front of a packed house early in the run), the second half was littered with many a five-star moment, including Adelaide’s moving second lament, a Sinatra-esque Luck Be a Lady, and the precise and energetic Crapshooters Ballet. However, for me, the vocal performance of the night was by Adam Makepeace as Nicely Nicely Johnson, who delivered a rousing and extremely capable rendition of the tricky Sit Down You’re Rockin’ the Boat. A special mention also to Tilly Bartholomew as Arvide Abernathy, who was charming and note perfect in More I Cannot Wish You, and displayed great tenderness and well-placed comedy throughout the performance.

This show aimed to take the original musical back to its roots in the 1930s, and some nice touches in Grace Dickson’s choreography – particularly in Take Back Your Mink – felt very reminiscent of that golden era. Director Lucy Evans also cast some females in traditionally male roles as a nod to some of the period’s female gangsters, and, while a brave choice, I felt Evans could have gone one step further in allowing these characters to explore their femininity and interact with the male characters as women, rather than women pretending to be men. Still, Lila Pitcher was commanding as Chicago big-shot Big Jule in an interesting gender twist.

Yet for all the great work by the performers and band (who never faltered under Steven Segaud’s masterful musical direction), I was a little disappointed in the production values of the set and costumes. These elements were quite basic, and with a bit more attention could have added much more “wow factor” and style to be sympathetic to the show’s overall creative aims and chosen time period.

All-in-all, a feel-good romp of a show. Don’t gamble – buy a ticket.

Go to the Edinburgh University Footlights