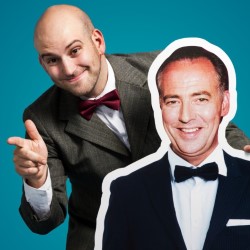 “The show is about my childhood hero Michael Barrymore, his life and how it influenced me.”

WHO: Nick Cassenbaum, Performer and Co-creator

WHAT: “Ever since he was a kid, Nick has loved Michael Barrymore. In this heartfelt and playful tribute, Nick invites you to examine the turbulent relationship between showman and spectator. Using his unique and praised style of storytelling, and Barrymore’s iconic shticks, Nick intertwines his own personal stories with tales of Barrymore’s rise to fame and ultimate downfall. With live music and gags-a-plenty, it promises to be ‘Alwight’! Nick returns to Summerhall after his 2016 hit Bubble Schmeisis. Created with Danny Braverman (Wot? No Fish!!).”

This is my second time bringing a show. I came in 2016 with Bubble Schmeisis, which was on at Summerhall and had a ball. The show has been touring since, this year Malta and Detroit! before that I used to work as a technician at the Pleasance, that is what got me excited about the fringe. Cramming in as many shows as possible. And then there was the year i bought my first street show to the Royal Mile. I did a trick with a cucumber….we made about a tenner.

Oh it has to be taking Bubble Schmeisis to Detroit. The University of Michigan brought us over. The show is all about going to steam baths in East London. The venue they got us was an actual steam baths call the schvitz. It was fantastic, it is a real historic place in Detroit and to be there was a real treat. Everything about it was amazing, the tiles, the history, the people and most importantly the steam.

The show is about my childhood hero Michael Barrymore, his life and how it influenced me. But more than that it is about the relationship between entertainer and audience, and how disposable entertainers are to us. It borrows a lot from Barrymore’s style and features live music, storytelling and audience interaction. I wrote the show with Danny Braverman, we worked together on Bubble Schmeisis after I saw his show Wot! no FIsh? and thought…I have to work with this person. S

Sian Baxter is producing who I have been working with for a couple of years now. The show was previewed at NOW18 at the Yard Theatre and will be headed to the Batterseas Arts Centre in the Spring…where else…who knows?!?!

I am super excited to see Thatcher Queen of Soho back. It is a fantastic show, hilarious with plenty of audience interaction. If people like my show…I think they will love this one.
My mates Sh!t Theatre who are bringing back DollyWould, a great show.
The really funny Top Joe. He’s great and wears a high vis so you can’t miss him!