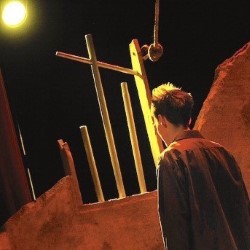 “I’m coming back to Edinburgh for the third year. I had a little toe-in-the-water limited run of six performances in 2017 and got the festival bug.”

WHAT: “A political thriller with biblical bite. In a contemporary single-faith Middle Eastern state, a charismatic preacher with a radical message of peace emerges from the desert. As violence continues to tear the region apart, his followers are persecuted and imprisoned. A 21st-century Judas is interrogated but is this zealot really the betrayer or betrayed, and who is ultimately pulling the strings? From the same team that presented the sell-out Mengele at Edinburgh Fringe 2018, Judas is ‘an intriguing and relevant parable for our times’ (FringeGuru.com). ‘Magnificent. Riveting. A powerful, moving, and vitally important piece of theatre’ (BroadwayWorld.com).”

I’m coming back to Edinburgh for the third year. I had a little toe-in-the-water limited run of six performances in 2017 and got the festival bug. Last year I came back with three shows, one of which, ‘Mengele’, was a sell-out show and picked up some great responses, another, ‘Shell Shock’, picked up a tour of Australia. Against that, we also caught a bit of flak and had our posters vandalised; all part of the fun. We took both shows to Adelaide as well, where we were also lucky enough to sell out, and last month we took ‘Mengele’ to the Avignon Festival which was fantastic, performing right next to the Pont d’Avignon in French and English. We ran subtitles, but in a classic fringe venue, with a low ceiling, it meant we had to perform almost the entire show with our backs to the wings on opposite sides of the stage so that the audience could see the subtitles between us. It didn’t make for dynamically physical performance…

The biggest thing of the last year would be that after EdFringe18 we went to Australia to tour ‘Shell Shock’. The show is a mental fitness-themed solo piece framed in a military context, and we toured in support of the Invictus Games in association with the charity Stand Tall for PTS. We went to Brisbane, Canberra, Melbourne, Sydney and 22 towns along the way, travelling in a convoy of military and first responder vehicles, blue lights flashing, blaring woo-woos and all! An amazing experience – and only one kangaroo came through a windscreen along the way…

In the last year, we’ve also introduced our new show, ‘Judas’, which we opened at Adelaide Fringe and which we’re bringing to EdFringe19 as well as reprising ‘Mengele’.

We’re producing ‘Judas’ this year after a long process of script editing, rehearsed readings and workshops. In imagining Judas as a 21st century radical religious zealot, the play has relevance in the present and echoes the rhetoric of today in telling a tale from the past. After trying out a version of the play in Adelaide we were encouraged by very positive responses to develop it further and bring it to Edinburgh. We are thrilled to have a truly international cast for such a piece with global resonance and are being joined by Stefanie Rossi from Australia and David Calvitto from the US. By giving the piece a showcase alongside the more established ‘Mengele’ we hope to find producing partners to take the play further afield and repeat the international touring pattern of previous productions. We also hope to raise awareness of the work of Amnesty International, who we are supporting with this show.

As always, there’s so much to recommend, but if I had to name one, I’d say that David Calvitto is a must-see. He is an Edinburgh stalwart, a previous Stage Best Actor Winner and has once more teamed up with writer and Fringe First Winner Brian Parks with a solo show ‘The Professor’. I saw a version of this in Adelaide and in David’s hands, this will be a comic masterpiece of a performance, of the best kind, one that gives you much to think about afterwards. Brain’s writing is incredibly clever, witty and downright funny as well as frequently poignant and astute – and David is simply a comedy genius. Go see it!