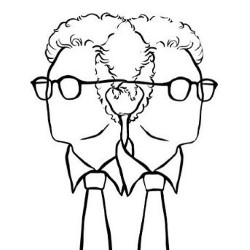 “I watched Love Island for the first time. I have no idea why I’d never seen it before. If you’re resisting it, just watch one episode. It’s blown me away. It’s like watching Breaking Bad or Twin Peaks for the first time. It simultaneously presents the absolute worst and absolute best aspects of humanity.”

WHO: Luke Smith: writer and performer

WHAT: “Thump. James Corden hears a thump underneath his chat-show desk. Thump. It’s the evening before the start of his American talk-show career. Thump. This is not a stand-up show. Thump. But it’s written and created by my stand-up comedy persona. Thump. I understand that’s confusing. Thump. I hope you enjoy it. Thump. Thump. Love. Thump. Thump. Ego. Thump. Thump. Death. Thump. Thump. Sex. Thump. Thump. The Desk. ‘Baffling and daring’ **** (BroadwayBaby.com). ‘A tiny work of comic genius’ (Scotsman). ‘His real name is Luke Smith’ (Steve Bennett, Chortle.co.uk).”

WHERE: Paradise in The Vault – The Annexe (Venue 29)

I’ve been coming up to the fringe in some sort of performing capacity since 2014. Each year I feel like I’m stepping right back into an anxiety dream, exactly where it had stopped the year before. It’s great though. Doing the fringe is like fighting a boxer that will sometimes punch you in the face and sometimes give you a bouquet of flowers.

I watched Love Island for the first time. I have no idea why I’d never seen it before. If you’re resisting it, just watch one episode. It’s blown me away. It’s like watching Breaking Bad or Twin Peaks for the first time. It simultaneously presents the absolute worst and absolute best aspects of humanity. Just amazing television. Oh yeah, I went on a teaching course, moved to London, wrote a show and had a complete career change.. but it’s mainly the Love Island thing to be honest.

We’ve been previewing it since Feb, but the idea had been knocking around the old noggin for about a year before then. I wrote it and persuaded the great Rosie Harris to direct it. Neither of us had done anything like this before. It’s a hybrid between stand-up and theatre and we couldn’t really predict what shape it would take until we started previewing it at comedy festivals. We would love to take it somewhere after this month, but a show like this really feels at home at the Edinburgh Fringe.

The Death Hilarious: Razor. Incredibly funny, dark virtuoso performance from one of the most hard working people in comedy. Grotesque, beautiful, hilarious.