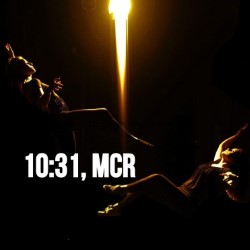 “I have graduated and landed my dream job in a regional theatre down south, but all this can never compare to the thrill of coming out of university and learning how to adult properly. I burn my toast 3 days out of 5.”

WHO: Fabiana Sforza: Writer and Director

WHAT: “‘I am going to write a book about this. The goings on of tonight. The events.’ More than two years on from the Manchester Arena terror attack, 10:31, MCR reflects on the impact the tragedy has had on the younger generations, and presents a new verbatim play that mixes voices and stories from different age groups, different backgrounds, different beliefs, and different times.”

Yes – it is so exciting and terrifying at the same time! My company and I have only been here one day, and we are already in love with the city and its festival buzz. We got to meet lots of different performers and theatre companies from all over the country, and it has already been incredibly eye-opening. We cannot wait to not only perform on the Edinburgh stage for the first time, but also to check out the amazing range of talent that this year’s Festival promises to have. The programme looks incredible, and we are sure this is going to be an experience we will not forget (especially the 9 hour overnight Megabus journey – that we will NEVER forget).

I remember wanting to apply for last year’s Festival but being too scared and just letting it go. I also remember sitting on my sofa catching up with friends who were at the Fringe and feeling like I had missed out on something really really exciting. So the biggest thing to have happened to me is probably gaining the courage to just do it and bring a show up! I have also graduated and landed my dream job in a regional theatre down south, but all this can never compare to the thrill of coming out of university and learning how to adult properly. I burn my toast 3 days out of 5.

10:31, MCR is a project I have been working on for the past two years as part of my Masters by Dissertation. I was inspired by Carly Wijs’ play Us/Them, which talks about the Beslan school siege of 2004 from the point of view of two children survivors. Wijs was herself inspired by the astounding resilience of the young survivors, and their willingness to move past the incident and grow stronger from it. When the Manchester attack happened in 2017, I remember seeing headlines day after day becoming more and more hateful towards certain religious groups and ethnic minorities, using photos of the victims to instigate racist and islamophobic propagandas. This was when I decided I wanted to write a play that aimed to give a voice back to the young people who were involved in the accident. This is why I worked with a group of local young people discussing the attack and the mediatic response it had received. The RnD process also included getting in touch with Liv’s Trust, a charity funded in honour and memory of Olivia Campbell-Hardy, a victim of the Manchester attack. Liv’s mum and dad were very supportive and encouraged us to share rehearsal pictures with them. I also collected interviews and vlogs from the internet, and pieced them together to portray a different view of the attack altogether, one which shifted away from the divisive agendas the media had been pushing on viewers/readers.

Our company is made up by a few university friends; we have worked on different productions together so we knew we could easily do it again! My production manager, Esther Malkinson, has been to the Fringe for four years now, and is a real connoisseur of all things festival. She is in charge of our budget, our admin, she makes sure we don’t get lost in the city whilst scouting for shows, she ensures we eat properly and also operates the show – she’s a powerhouse! Ciaran Forde, Rio Topley and Megan Sharman act in the play, but also make sure we do at least a rendition a day of Maxwell’s “This Woman’s Work”‘s harmonies. This can happen at any time and in any place (if you were on the Mile at about 630pm today, we are so sorry).

We premiered the show in London in early August at the Drayton Arms theatre, and were absolutely overwhelmed with support and positive feedback from lots of people, which made us even more excited to go to Edinburgh! Looking forward, we would love to make sure the play travels the country and hopefully introduce workshops for young people around the theme treated.

After you watched 10:31, MCR, you must get yourself down the road (theSpace on North Bridge) to see Tally Ho, Secret Several! by Aireborne theatre. This comedic twist of a classic story will have you in stitches!
Also, make sure to catch #HonestAmy at the Pleasance Dome – I have been following Amy on Twitter for a while and she is absolutely hilarious. If you’re looking for a feel-good show, this is the one!