“Over time he has learned to exploit his environment and shape it more than it shapes him. Unfettered by modesty or empathy, he crashes about in the pursuit of ego gratification. This is what many of us who were born in the two decades after World War II seem to have done on a smaller scale.”

“Simpsons did it! Simpsons did it! SIMPSONS DID IT!” It’s taken over a decade but reality itself is now confronted with a problem once only a headache for the writers of other cartoon shows. When a Native American Casino Manager predicts Lisa Simpson will one day become President of the United States, the man she replaces is none other than Donald Trump. Trump’s self-funded real life run for the White House is proving no less entertaining, and there is a growing possibility that he might become the first registered New Yorker to win the Presidency since 1968.*

In his campaign book, Crippled America, Trump sums up the state of things by quoting Mark Twain, “Suppose you were an idiot. And suppose you were a member of Congress. But I repeat myself.” Nowhere (that I know of) does Trump repeat what the comic sage had to say on the subject of golf.

One day the campaign trail of 2016 will be done and dusted. When only historians are left to weigh its import against Adams v. Jefferson or Lincoln v. Vampires there will still be many in Scotland ready, and willing, to point to scars (physical as well as emotional) and say, “I telt ye so. That man didnae ken one end of a spurtle frae t’other.”

Pulitzer Prize winning writer Michael D’Antonio has published more than a dozen books on subjects ranging from the space race (A Ball, a Dog, and a Monkey) to the Vatican’s role in sheltering predator priests (Mortal Sins). His matter of fact style brings clarity to some of the messiest, most emotive issues of recent history. Born and raised in New Hampshire, Michael now lives on Long Island with his wife, the  psychotherapist, professor, and author, Toni Raiten-D’Antonio.

In retrospect the answer seems obvious. Back then, in 2013, I had just finished Mortal Sins and the subject came up at lunch with my publisher Thomas Dunne. I hadn’t ever taken-up a book on an editor’s suggestion and at first I thought there wasn’t much to say about Trump. But during subsequent conversations we settled on the idea of a biography that was more contextual than most. I generally disagree with the “great man” theory of history and see things working out more as a matter of forces beyond an individual’s control.

Is Mr. Trump more a product or more a shaper of the times in which we live?

Trump is both a shaper and a product of the culture of narcissism identified by Christopher Lasch. However over time he has learned to exploit his environment and shape it more than it shapes him. Unfettered by modesty or empathy, he crashes about in the pursuit of ego gratification. This is what many of us who were born in the two decades after World War II seem to have done on a smaller scale.

In this time self promotion (and indulgence) have become the norm and perhaps the worst fate of all is to be always in the audience and never on stage. The support Trump receives now in the political realm is an expression of this desire. people are living through him, enjoying the vicarious thrill of being center stage.

You chronicle the ways in which groups and individuals were “suckered” by promises made but not fully delivered by the Trump machine. Was former First Minister Jack McConnell one of them?

Plainly, yes. McConnell acted in the spirit of Sinclair Lewis’ character George Babbitt, who practiced boosterism as a religion. Both Babbitt and McConnell acted sincerely, believing that by chasing new business and, in McConnell’s case development, they were working for the common good.

Of course “good” is a complex and difficult thing to determine and like many politicians. McConnell made the mistake of believing he understood what he was getting as he courted Trump’s investment. Trump is a wily creature who never makes a commitment without an “out” in it. 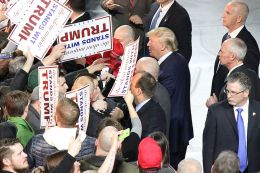 Has Mr. Trump ever watched Local Hero? Did it make, or would it have made, any difference to his relationship with the holdout residents of Balmedie such as Michael Forbes?

I don’t think Trump ever watched the film. If he did, he’s not the sort to be influenced, on a moral level, by anything that challenges his belief system.

What does he believe? He believes in Donald Trump and, beyond that, not much at all. As far as I can tell he wasn’t aware of the life his ancestors lived, nor is he aware of the fact that as he tried to push Michael Forbes off of his land he was victimizing him in the way that his mother’s people were victimized historically.

In Local Hero the omnipotent Felix Happer (Burt Lancaster) is tormented by his overzealous therapist, Moritz (Norman Chancer). Moritz’s self-appointed role is to heap scorn and abuse on his overmighty client. Is that your role in the story of Donald Trump?

I wouldn’t say ‘heaping scorn.” I think my role is always to find and reveal the fullness of a story – in this case a man’s life story – in a way that is more complete and, I hope, compelling.

Trump is the least reliable narrator imaginable, so it falls to someone like me to make the attempt at telling the tale of his life. Yes he is overmighty, but in such cases scorn isn’t as illumination. With a little more light, for example, Scotland might have avoided some of its Trump troubles.

Each year The New York Landmarks Conservancy recognizes New Yorkers who have made outstanding contributions to the City and honors them as Living Landmarks. You wrote that not getting that award genuinely hurts Mr. Trump’s feelings. Will the revocation of his GlobalScot status and honorary degree have a similar impact?

I must say that I think he would be unmoved. His attachment to Scotland is commercial, and not so heartfelt, I think. New York is his true home and he would find much more validation in honors bestowed there. I also think that, like it or not, the degree and the Global Scot honor were conferred by those who wanted Trump’s favor in some way. As such, it’s less distinct an honor than the Living landmark designation.

If any one decision lost John McCain the presidency it was arguably his choice of running mate. Have you any predictions about who Mr. Trump will ask to join his ticket and why? How does someone who projects a sense that he is irreplaceable and cannot be improved or balanced, begin to tackle that question?

After seizing the hard Right ground, Trump is already moderating his campaign approach, drifting toward the middle. I expect him to become more and more like a regular candidate as time passes. If I had to guess about his VP choice I would say that he’ll look for someone who could reassure those who find him repugnant. Some of the men competing with him today seem to be angling for a spot on the ticket. Of them I think Chris Chistie might be the smartest choice. Trump knows him well and has insulted him the least.

Candidate Trump declared that all illegal immigrants would be required to leave the US, but that they could return legally. His rival Ted Cruz went one further and said he would never allow former undocumented migrants back. Mr. Trump is campaigning for the Republican nomination which in living memory has been sought by homophobes, misogynists, segregationists and holocaust deniers. How is it that he is singled out for travel restrictions, stripped of honorary degrees, etc? What does that say about how Mr. Trump is (and chooses to be) covered by the media?

The American media is completely flummoxed by Trump. In part this is because it has, itself, become part of the entertainment economy. Journalistic values have been smothered by commercial interest and most reporters are not accustomed to playing the role of watchdog or guardian. As the greater entertainer in every encounter, Trump dominates his relations with the press.

It’s important to keep in mind, however, that we’ve been measuring his success with a small fraction of the electorate. His support has never ranged higher than about 15 percent of the voting public. These backers are very firm in their choice, but opposition to Trump is just as firm, and the numbers on that side are much greater.

Will Donald Trump be an effective President?

By history’s measure, no. By his own lights? of course.

What should be playing on the stereo when we’re reading Never Enough: Donald Trump and the Pursuit of Success?

The list would have to include, perhaps in this order, Coming to America, by Neil Diamond, to honor his immigrant roots. No Son of Mine by Genesis, to highlight Trump’s exile to military school. Sinatra’s New York New York. (Unavoidably.) More, More, More by Andrea True and his favorite tune, Peggy Lee’s, Is That All There Is?

*Richard Nixon moved to New York following his defeat in the 1962 California gubernatorial election. During his first term as president, Nixon re-established his residency in California which was his home state in the 1972 (as it had been in the 1960) election.