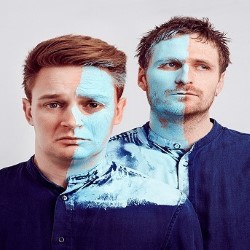 “Our show is a narrative-driven, sketch comedy show.”

WHO: Henry and Joe: Writer / Performer

There are so many high profile achievements it’s hard to pick our top two (we’ve spent a lot of time in LA), but if we were pushed it would be Henry getting a part in a meerkat advert and Joe doing an advert dressed as a chicken…

Our show is a narrative-driven, sketch comedy show. It’s accompanied by an original score written by Max Perryment and you’ll see some crazy characters (look out for the mad doctor – he’s mad). It was written by us and directed by our friend, mentor and doctor, George Chilcott (he’s mad).

The Tattoo, there’s a lovely little pub called The Brass Monkey and, of course, the beer gardens around George Square are a delight.