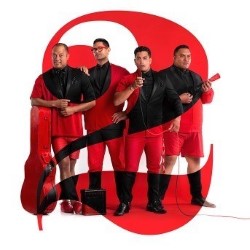 “Absolutely everyone is saying you should go see it and that’s because everyone should absolutely go see it.”

There was a time when people actually read the newspapers. No, no, it’s true. Every day they took a few coins out of their pocket which were exchanged for the latest headlines, insight, and opinion. It wasn’t a perfect system, fake news and churnalism are nothing new, but it ticked along merrily enough. Then globalism happened. Then digitisation happened. And it turned out that those who own and operate newspapers have about as much collected wisdom as the Creator bestowed on a stick of celery. Hōhonu kaki, pāpaku nana.

Back in the day, the longest-running year-round show in Edinburgh was the collapse of the North British Newspaper. The coming of a new Scottish Parliament and Government, the continuing health of Scotland’s professional and service sectors, the growing significance as well as size of the capital’s festival season, meant there was more raw news than ever. The masses came online and there were even more ways to consume and digest news content than ever.

And yet, somehow, as the cricket ball of destiny gently arced towards the green, the outstretched hands of the fielding news industry were allowed to slip into pockets of mediocrity. The ball struck head-on even as the note of nonchalant condescension whistling from the Scottish media’s main mouthpiece reached its shrillest. With shoulders still shrugged, the impact stunned, concussed, and obliterated the North British Newspaper’s faculties, reducing the once proud and active player to a drooling spectator convalescing cantankerously in the pavilion.

Still, every year, all but dead, and definitely decaying, the North British Newspaper is solemnly wheeled into the commentary box to provide its two penny’s worth of insight into EdFringe. Older producers (though rarely any actual punters) convince themselves that unlike everyone else on Earth, the denizens of Edinburgh actually give a tinker’s fart what their crippled local newspaper has to say about anything. EdFringe was (and is) no less of a local or an analogue experience than reading the North British Newspaper on the train into Waverley. And yet EdFringe has not only survived but thrived in the new cultural landscape.

For an insight into why, one need look no further than ‘Modern Maori Quartet: Two Worlds’ – this season’s must-see toast of the town. Absolutely everyone is saying you should go see it and that’s because everyone should absolutely go see it. Firstly, because the show is beautifully presented. Four great looking guys in matching suits which, even at this late stage, are so sharp and well pressed you might cut your finger on them. Koro, Big Bro, Uncle, and Bub take to the stage for an hour of storytelling at its finest.

In less ambitious or dexterous hands the show’s premise might have come out a smidge goofy. But the quiet charm, relaxed confidence, and unashamed boldness of four matching, but totally different performances leave no room for doubting the effectiveness of the narrative architecture. We are given a privileged insight into the soul of a distant nation coming to terms with the passing of the old and the rise of the new. The stories are centre on unrequited love, unending grief, unsettling self-denial and, finally, most poignantly of all, the unravelling of hope.

The music is soulful. The dance routines are measured and graceful (I’ve got my promised haka). This is the closest I may get to seeing the badinage, banter, and rehearsed spontaneity of the Rat Pack on stage in my lifetime. Culturally nourishing, intellectually stimulating, and physically elating – how tragic for all humanity that this show is not a snack food product.

What this show is, is a testament to what soul searching can do for a person and for a people. No answers have been provided when the house lights come back up, but the underlying questions of life, the universe, and everything have been defined and refined – which isn’t bad considering it’s pretty much just four blokes singing songs for an hour.

Britain right now is in the midst of a seemingly endless period of schism and interregnal discord. The toxic vapours of the public’s angry nostalgia and self-pitying hubris are left to fester by the breakdown of the traditional cultural cloud lifters such as the North British Newspaper. How fortunate it is then that the global presence of EdFringe can deliver a reaffirming shot of cultural adrenaline, sourced from far away nation tormented by the past, troubled in the present, and uncertain of the future. It’s a damn pity that, with the archbishop incapacitated and irrelevant, there is no one around to crown Modern Maori Quartet: Two Worlds kings of the Fringe ‘19 and joyfully exclaim, “Tēnā koe Kïngi o te Kīngitanga.”