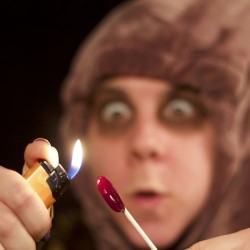 WHAT: “Three goddesses are summoned to Earth through an ancient ritual; instead, the heavens send the women your mother hoped you would never become. These grotesque creatures go on a hilarious, offensive journey of feminine storytelling (from Eve to Cinderella) to discover what has happened to the Wild Women. In Oneironauts, we slip away from reality into deep sleep, where time begins to melt. Here we encounter the moments, memories and shadows our subconscious has tucked away. We submerge the audience into our dreamworld of visual poetry and post-modern dance and dare them to engage the unknown.”

Yes! This is our first time to Edinburgh but certainly not to Europe!

Our company, The Whisper Theatre Collective, formed out of our MFA cohort in which we studied devised physical theatre in Berlin and Chicago (through Arthhaus Berlin/LISPA and Columbia College Chicago). We’re bringing two shows to the Fringe that are being performed back-to-back, Wild Women and Oneironauts. Wild Women is a hilarious lady bouffon trio and Oneironauts is a dance/circus theatre experience surrounding dreams. Two exciting polar opposites.

We are super looking forward to seeing shows, meeting artists from around the world, and STREET MARKETING! We have a Spanking Booth for Wild Women – so look out for us…and your butts…hehehe…

Well…we formed a company AND graduated with our MFAs! So that’s new and exciting. And it means we underwent a lot of therapy.

What else? Four of us moved in with our significant others. No animals have been killed, but a lot of plants have, accidentally. We’ve watched Endgame and the third season of Stranger Things, we’ve taken bike rides, we’ve eaten ice cream. We’ve enjoyed the glorious Chicago summer after the bitter -40 degree temperatures we experienced this winter. And we’ve been working our faces off since graduating – half of us work at SoulCycle and the other half works as Segway tour guides (no, I’m not kidding). Ah! And we did a co-production with The West in Berlin, putting up a work in progress of Le Taste of Jean-Pierre – look out for it next year!

The Whisper is presenting a double feature of Wild Women and Oneironauts. Wild Women features three lady bouffon clowns who relive their own hilarious, raunchy versions of female-driven stories (from Adam & Eve to Cinderella). Oneironauts uses physical theatre, dance, and partner acrobatics to tumble into the dreamscape, where we wonder if we will ever find our way back.

Our company came together after studying for our MFA in Lecoq-based theatre at Arthaus Berlin and Columbia College Chicago. We’re from all different performance disciplines, and we worked together for two years on both of these shows. Each company member also has their own show – these are just two of them. We premiered both of these pieces at The Third Mask, a festival for new devised works, in Chicago, USA, as well as performing works-in-progress showings in Berlin. After the Fringe, we plan to tour the shows around Chicago, and we would love to create international exchanges with other companies (perhaps with others we meet at the Fringe!)

Manual Cinema’s Frankenstein – They’re Chicago friends of ours and do INCREDIBLE puppetry work with simple mechanisms like overhead projectors and live instruments. Innovative, heartfelt, and anyone who appreciates tech will love it because they have a backstage feed live during the show.

Desk by Reetta Honkakoski Company – Judging by the trailer, we’re excited to see them because of the physical precision and rigor that goes into their work. Looks amazing!

2 Clowns 1 Cup by Ugly Bucket Theatre, Witch Hunt by A&E Comedy, The Burning by Incognito Theatre, Kill the Princess by Bait Theatre – all shows by other WILD WOMEN, and we are INTO IT.